Jimmy Comack is Developer Relations Advocate at Yoast by day, gamer and film addict by night. He's a big proponent of open source software and tries to contribute to the OS community when possible.

This past weekend I was fortunate enough to be able to join the Yoast Dev team on our visit to PHPBenelux Conference 2016 in Antwerp, Belgium. This two-day event was jam-packed with tutorials, speakers, interesting conversations and lots of laughs. There was too much going on to cover it all, but I’ll discuss some of the highlights of the weekend.

PHPBenelux Conference offers their visitors a chance to attend a tutorial of their choice on the Friday morning. I chose to attend the Manage Your Content with ElasticSearch tutorial hosted by Samantha Quiñones. Despite having dabbled with Elasticsearch in the past, I felt that there was plenty to learn about this awesome search server technology.

During the tutorial, we were taught the basics of Elasticsearch, but also got to see some of the more awesome (and less known) features that it has to offer. The tutorial rekindled my interest in Elasticsearch and has pushed me to continue working on a PHP package I was creating to make working with Elasticsearch that much more easier.

To top things off, the kind people of PHPBenelux had organized an awesome lunch for all the tutorial goers. So far, this conference was off to a great start.

After a wonderful and personal opening keynote by Cal Evans on the matter of how “Community Works”, it was time to attend some of the various talks that were going to be presented during the day. The ones that stood out most to me, were Rafael Dohms’ “Writing code that lasts” … or writing code you won’t hate tomorrow and Enrico Zimuel’s talk on Encryption, authentication and data integrity in PHP.

Rafael spoke about how maintaining code can become a difficult task if you write your code in a certain way and how changing the way you write code, can be beneficial in the future.

Enrico’s talk focused on how you can assure that encrypted data is truly secure and how you can validate that the data you’re trying to send can’t (easily) be intercepted and decoded. 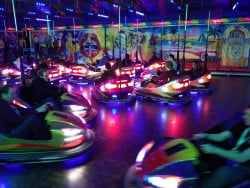 Day 1 ended with a nice and buzzing social in combination with a traditional PHPBenelux dinner: fries with typical Belgian / Dutch deep-fried delicatessen. Another tradition of PHPBenelux is bumper cars, which was a popular attraction during the entire evening despite all the bruising that was a result of it.

Day 2 was another busy day with lots of talks, raffles and of course another social event near the end.

I started off the day by visiting Matthias Noback’s talk on The quest for global design principles, which (to me) tied in nicely with Rafael’s talk the day before. Matthias discussed some design patterns and principles that can help developers to formulate better object-oriented code.

After this talk I remained seated as Jeremy Coates was about to teach us about The Lost Art of Defensive Programming. This talk was one of my favorites and highlighted how someone who grew up in a time before the internet deals with writing code and how applying specific techniques can make all the code you write easier to maintain and alter. Most of the points he discussed were ones that felt natural to me and it was good getting the confirmation that some of my approaches are considered to be good ones.

Regular Expressions are still somewhat of a mystery to me, but I was really happy to be attending this talk so that I could finally find out how to effectively apply them in my own code. Starting off with small examples, Jordi soon showed us other, more complex examples and ended with some completely bizarre and complex ones, just to show off the power of Regular Expressions. This was definitely one of the more entertaining talks I saw during the weekend.

During lunch, keynote speaker Cal Evans wanted to take a photograph with us. 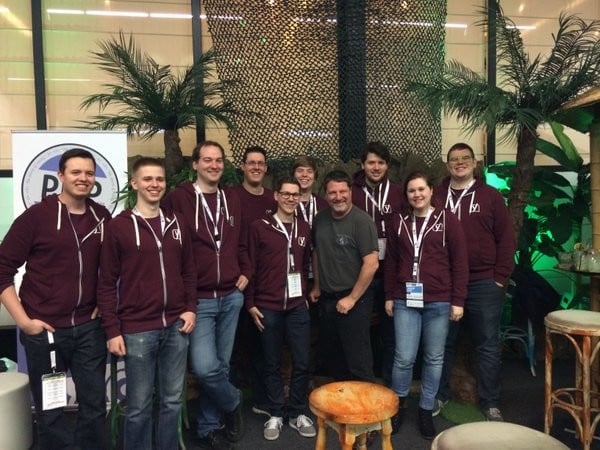 Huge fan of their work. Thanks for taking a pix with me.#phpbnl16 pic.twitter.com/09lKqs8RaR

Fast forward a few hours for the next talk, in which Ramon de la Fuente taught us about how giving yourself ‘stupid’ challenges and approaching them with a different way of thinking, can lead to interesting insights that can help you find a solution faster than usual. The title Extracting wisdom from stupidity definitely applied to this talk.

The last talk for me before the closing ceremony was Anna Filina’s Speed Up Your Database 300 Times, which mostly contained information and techniques I already knew. Regardless, I still enjoyed what she had to say.

And then it was time for the closing ceremony. What followed was an onstage game of JeoPHPardy with players that made it through the initial rounds the night before. All the questions were aimed at things that either happened during the conference or that were PHP related. This was probably one of the most hilarious parts of the weekend.

After JeoPHPardy was over and done with, a raffle was held followed by a round of applause for all the speakers and crew that had worked hard at making PHP Benelux so great. Last, but certainly not least, we went to the last dinner and social of the conference.

Cal Evans mentioned that a community needs three pillars to thrive: role models, an active ecosystem and positive energy. After the PHPBenelux Conference, I can safely say that all three of these pillars are present within the PHP community.

This conference brought people together, allowed them to exchange ideas and share knowledge in an open and informal setting.

As a developer, I’m proud to be part of such a welcoming community and am thankful that Yoast gave me the opportunity to attend this event. I would also like to say thank you to the organizers and all volunteers of PHPBenelux Conference 2016; you did an excellent job.